Habit Two, the Habit of the Forest and the Trees, identifies the cultural dimensions of a client’s interaction with the “Law.” In assessing the cultural dimensions of the “Law,” Habit Two looks expansively at the rules, the legal institutions and the key decision makers and players involved in the case or matter. Thus, throughout this post, we use the “law” to include legal rules and statutes, as well as legal actors (judges, adversaries, administrators, probation officers, etc.). Habit Two points out aspects of a case that are important for legal success:

Habit Two sharpens the lawyer’s focus on the relationship that actually matters: the client’s world and the ways in which that world interacts with the world of the law. By contextualizing the client’s problems and perspectives within the legal system, Habit Two prepares the lawyer to effectively represent the client and identify potential legal solutions.

Habit Two uses a three-way Venn diagram to identify and analyze differences and similarities between a client, her lawyer and the law. 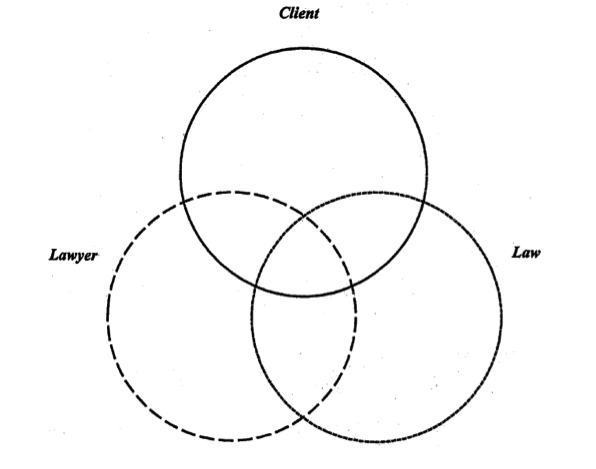 While the most complex to explain and learn, Habit Two also offers the biggest payoff—a clearer frame by which to internalize the many cultural dynamics in a case while keeping one’s eyes centrally on the client’s legal claim.

Give students 4 minutes to list the similarities and differences between their clients and the law in these circles. During this portion of the exercise, you may ask the following guiding questions: 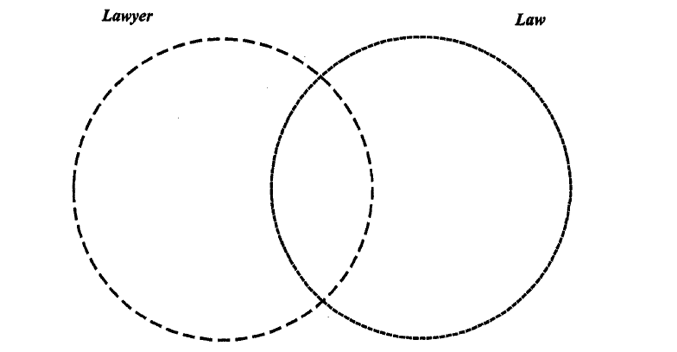 This diagram features two circles side-by-side, also overlapping in part; the circle on the left represents the lawyer’s world and the circle on the right represents the world of the law (this is the same bottom circle as in the previous diagram). The area of overlap between the two circles, when filled out, contains characteristics shared by the lawyer and the legal system.

The Lawyer-Client Dyad: Have students refer to their Venn diagram from Habit One. 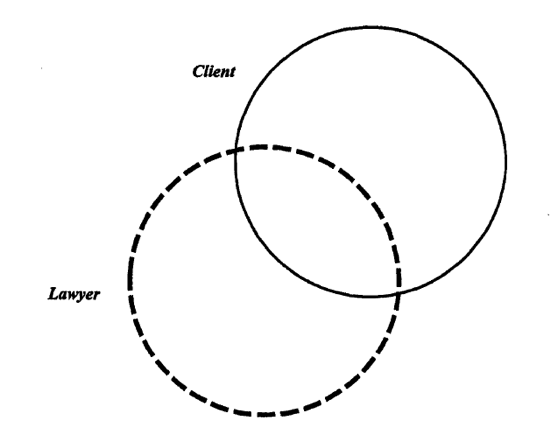 The Three Rings in Action: 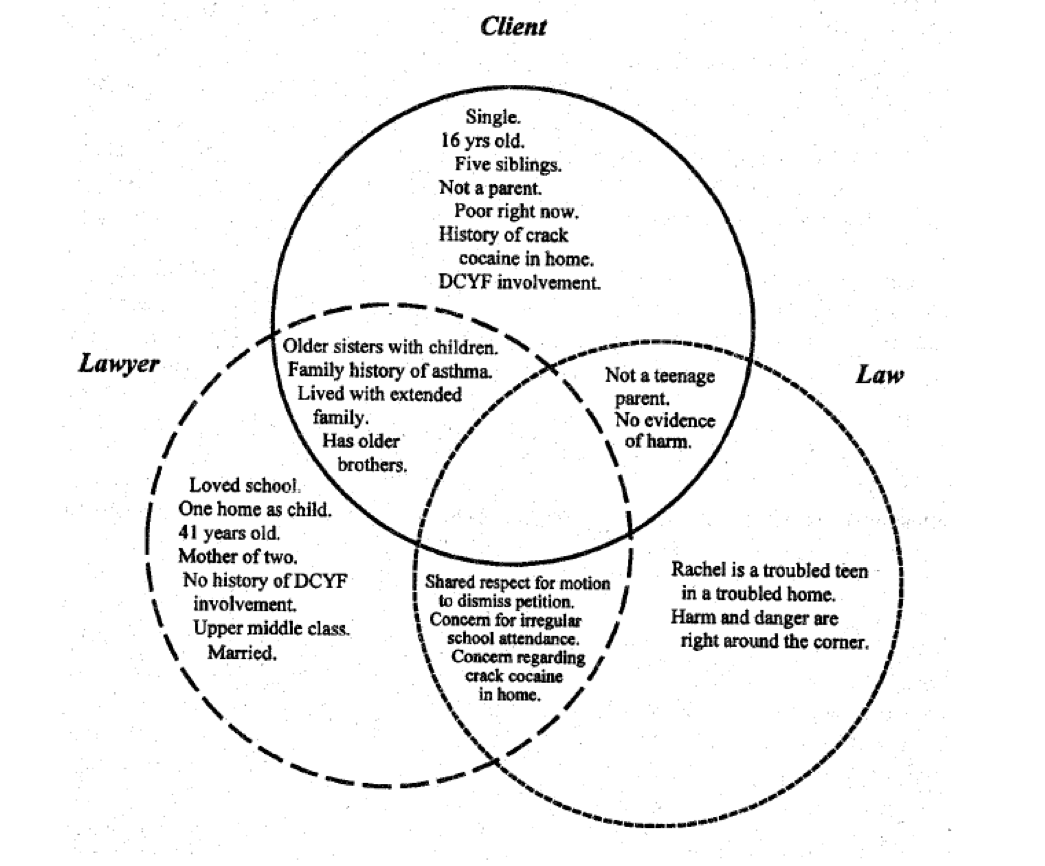 This fourth diagram juxtaposes the previous diagrams, depicting the three rings at once: that of the client (on the top center), the lawyer (on the bottom left) and the law (on the bottom right). The area of overlap between two circles represents characteristics shared by those two worlds. For example, the area of overlap between the client and the law lists the following shared attributes: not a teenage parent; no evidence of harm. The area of overlap between the lawyer and the law lists the following characteristics: shared respect for motion to dismiss petition; concern for irregular school attendance; concern regarding crack cocaine in home. And the area of overlap between the client and the lawyer lists: older sisters with children; family history of asthma; lived with extended family; has older brothers. Meanwhile, each circle has areas that do not overlap with the others. For the client, these non-shared characteristics are: single; 16 years old; not a parent; poor right now; history of crack cocaine in home; DCYF involvement. For the lawyer, the unique attributes are: loved school; one home as a child; 41 years old; mother of two; no history of DCYF involvement; upper middle class; married. And for the law, the non-shared perspectives are: Rachel is a troubled teen in a troubled home; harm and danger are right around the corner.

In this debrief, we want to gather student perspectives and offer our own insights into what it means to be an effective legal advocate.

Compared to the client-law diagram, what do you notice about the lawyer-law diagram? This open question encourages law students to think about the ways in which they now resemble the more powerful law and the ways in which the legal system extols their “virtues.” For example, compared to their clients, the high degree of overlap between the lawyer and the law can be disconcerting for a client whose primary interactions with the legal system have been negative or disempowering. A client, therefore, may at first be rightly skeptical of their lawyer’s effectiveness or good intentions. With this in mind, the lawyer’s role is to ensure that this initial disconnect does not interfere with effective legal representation—that the lawyer’s legal expertise is properly channeled towards empowering their client, not alienating them. For example, the student can explain the law to a client and express concerns about the fairness of a provision or the student can explain how they will meet the legal standard using language the client understands. Most importantly, the student can remain vigilant even if the client expresses doubt about the student’s loyalty, and understand why the client might feel this way.

Why might it be important to think about the lawyer, the client, and the law in tandem? We offer this question to get our students to think deeply about the complexity of legal representation. Most students have never served as a “spokesperson” for another in a professional capacity. With this in mind, it is important for students to distinguish their own background, culture, and perspectives from their clients (i.e. Habit One). Even more importantly, students must begin to conceptualize their role in advancing their client’s interests against the backdrop of the law.

Which of the three dyads is most important for effective legal representation and why? The answer, most students will say, is the client-law dyad. While Habit One offered students the opportunity to think about how similarities and differences between themselves and their clients tug on effective representation, Habit Two builds on this initial framework by then asking students to refocus their energies on their client’s case from a legal, not a heuristic, perspective. Increasing the overlap between the client and the law, therefore, should be the lawyer’s biggest priority. We discuss these concepts in greater detail below.

Habit Two – Using lists to chart the similarities and differences

Like Habit 1, Habit 2 analysis can also be done by creating lists. These lists can precede, follow or be used as a substitute for the three rings.

Teachers can begin by asking students to reflect on their general sense of connectedness or disconnectedness from their clients, focusing on individual components of separation and connection. The goal is for students to think about their clients in as much three-dimensional detail as possible, so as to avoid the temptation to lump clients into large categories or to analogize to earlier clients with superficially similar needs. The following questions might help prompt students’ thinking as they engage in this preliminary reflection:

Next, teachers can invite students to reflect back on Habit One, identifying the ways in which their clients’ cases particularly move them, trouble them, interest them, annoy them, or otherwise affect their work. If they find themselves feeling less invested than average in the case, invite them to try to identify aspects of the case that may lead to that sense of estrangement. Teachers may point out that those items may stem from areas of difference between them (the students) and their clients. Conversely, if they feel exceptionally invested in their cases, invite them to identify the aspects of the cases that draw them in. In general, those may well be issues of similarities between them and their clients.

Students can then move on to consider the values and norms of the legal system relevant to their clients’ legal claims. In different cases, different aspects or decision-makers of the legal world may be relevant: a particular judge, an administrative officer, a prospective jury, a forensic evaluator in a custody case, the pre-sentence probation officer, or the legal text and circuit interpretation of that text. In some situations, they may even want to use particular legal opponents as the representatives of the legal system. As there are many different aspects or players who can represent the legal system, students should choose to focus on one that is especially salient to them and the case in that moment.

Students can then consider strong points and weak points of the client’s claim from point of view of the law, legal system or decision-maker, as the case may be, by asking themselves: what are some characteristics and values of a “successful client” – one whose legal position will be recognized and rewarded? They may want to identify hot-button issues: of all the characteristics listed, which loom largest for the law, legal system or decision-maker?

Students may then try to approach this dyad from the client’s perspective, asking themselves: how important is the legal claim to this client, right now? In considering this question, students should keep in mind the individuality of the particular client in this specific case context.

Students may then proceed to consider the values and norms of the legal system or decision-maker relevant to the ethical and rewardable legal claims of their clients. Of all the characteristics they came up with, which loom largest for the legal system?

Then, students can think about the extent to which they, as representatives of the law, share the values and norms of the legal system and decision makers above. When students find that they share many similarities with the law, they may come to understand why the client might perceive them as synonymous with the law and part of a hostile or impenetrable legal system.

At this point, teachers may explain to students that the key step in building a winning case is to refocus on the relationship that matters most of all—that between the client and the law—and to generate ideas on how to increase the common ground between the two. These questions may help prompt some ideas:

Finally, students (or lawyers) may bring themselves back into the picture, asking: How can I, as the lawyer, shift closer to my client’s areas of concern, especially those that are relevant to the legal world’s values?

This analysis jolts the lawyer out of the automatic pilot that may lead him or her to lump cases together and to neglect the individuality of a particular client in a particular case context. It also guards against her being overly distracted by her similarities and differences with the client, and refocuses her on the job of enhancing the chances of legal success of the claim.

Susan Bryant & Jean Koh Peters, Chapter 15, Reflecting on the Habits: Teaching about Identity, Culture, Language, and Difference, in TRANSFORMING THE EDUCATION OF LAWYERS: THE THEORY AND PRACTICE OF CLINICAL PEDAGOGY Carolina (2014), 357 – 358.